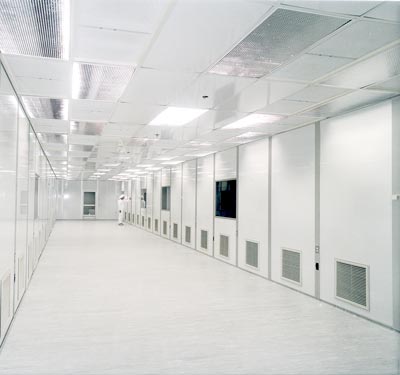 Cleanrooms are generally used for environmentally sensitive processes such as pharmaceutical production, culture study, or microprocessor manufacturing where even the slightest amounts of dust or other particles can disrupt the entire process. These rooms are rated by the amount of particles allowed per cubic foot, (or meter depending on the scale), and are distinguished by class. Particle sizes are measured in microns, a micron being comparable to 1/100 the width of a human hair.

For many years the Federal Standard 209E was the de facto standard in which all cleanrooms were based. Simply put, the classes associated with 209E were directly related to the amount of particulates in the air. For example, a Class 100 cleanroom air sample would produce no more than 100 particles (larger than or equal to .5 micrometers) per cubic meter of air.

The 209E standards expired in 2001 and the new ISO 14644 standards were put into practice. The reason for the change was to switch from the American standard of measurement to the metric system. The ISO standards are very similar, although the scale is different ranging from 1 — 9 (nine being the highest) and based on an ascending logarithmic scale. For example cleanroom samples with no more than ten particulates (no larger than .1 micrometers) per cubic meter of air, would be considered ISO 1.